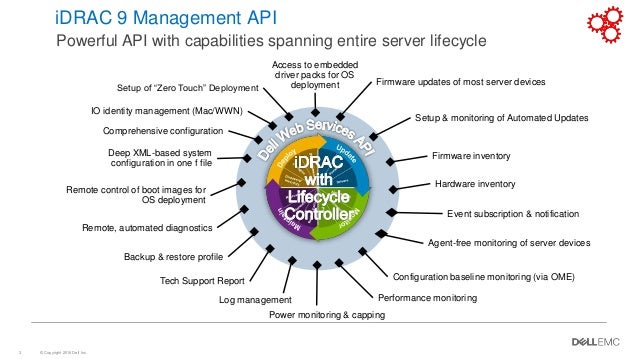 RAC987: Firmware update job for BIOS_J6T1Y_WN64_2.7.1.EXE is initiated. This firmware update job may take several minutes to complete depending on the component or firmware being updated. To view the progress of the job, use the "racadm jobqueue view" command. If the job is scheduled, the system will require a manual reboot.

· Online Method - Update all the firmware for a 12G, 13G, or 14G Dell EMC PowerEdge server in one step via the Platform-Specific Bootable ISO. The updates are done automatically after starting the server from the self-bootable ISO. This method requires a configured iDRAC, an external Internet connection and can take up to one hour to complete.

· The browser based update fails (this is a known problem according to Dell). I can putty to the iDRAC and have run . racadm fwupdate -u -g -d "C:\Sources\Dell\iDRAC 6\ESM_Firmware_9GJYW_WN32_2.90_A00.exe" where the path is a path on the Windows machine from which I am accessing the iDRAC. This fails as well. All other racadm commands I have ...

· Using a tool called RACADM (Remote Access Controller Administrator) you can update the firmware via a command line. The comand to update firmware is racadm fwupdate -p -u -d

· The Firmware Update page is displayed. Click the Automatic Update tab. Select the Enable Automatic Update option. Select any of the following options to specify if a system reboot is required after the updates are staged: Schedule Updates—Stage the firmware updates but do not reboot the server.

JeffeyGezzey Are you suggesting that "almost every other manufacturer" allows you to update a BIOS version using an out of band method with no downtime and no reboot of the running OS? Please, do tell... I'm not trying to be flippant, I'd just like to see that.

If you really want the world to beat a path to your door, try taking a nap.

Don't give someone a piece of your mind unless you're ready to live with what's left.

The road to success is dotted with many tempting parking places.